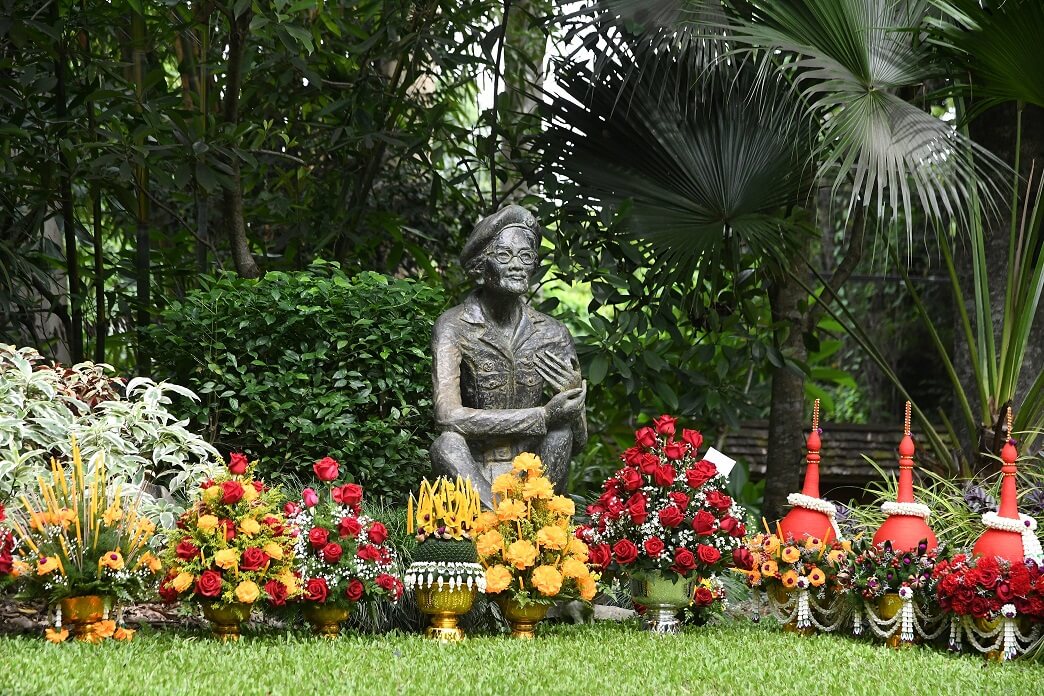 To mark the 25th anniversary of the passing of Her Royal Highness Princess Srinagarindra, the Princess Mother, Mae Fah Luang Foundation under Royal Patronage, in conjunction with Chiang Rai Province, held a merit-making ceremony and floral homage – the highest form of showing respect in the Lanna tradition. The event was attended by directors of Mae Fah Luang Foundation and the Governor of Chiang Rai Province who led representatives of various government units, the business sector and the general public to pay homage to the Princess Mother. All COVID-19 precautionary measures were put into place according to official government regulations. The event took place at the Mae Fah Luang Art and Cultural Park, Amphoe Meuang, Chiang Rai Province, on Saturday 18 July 2020.

The event began with a merit-making ceremony at Sala Kaew Pavilion within the grounds of Mae Fah Luang Art and Cultural Park. Mae Fah Luang Foundation directors and management, led by Capt Jitas Sornsongkram and ML Dispanadda Diskul, and Chiang Rai Governor Prachon Pratsakul, then headed a procession of government officials and general public to present traditional Lanna floral tributes on the lawn in front of the bronze statue of the Princess Mother.

ML Dispanadda Diskul, CEO of Mae Fah Luang Foundation under Royal Patronage, remarked that although the Princess Mother passed away over 25 years ago, Her Royal Highness’s words were still relevant and applicable to life in the modern day and age, particularly during current times which require huge adjustments towards the New Normal as a result of the COVID-19 pandemic, so life can continue under the changing conditions.

“The current situation with the spread of the COVID-19 pandemic has affected life all over the world, with no one truly prepared. All of a sudden, everyone has had to adapt. Mae Fah Luang Foundation has also had to adapt to the New Normal, and prepare for a recurring storm. Although Mae Fah Luang Foundation has adjusted its operations to cope with the current situation, we are still focused on the royal initiatives and vision of the Princess Mother as a compass to direct us in our development and social enterprise work as before.

“For almost 50 years, Mae Fah Luang Foundation has concentrated on developing and improving the quality of life of various communities in locations both in Thailand and overseas. We have continued to promote the royal initiatives of the Princess Mother as a principle for a simple lifestyle that benefits oneself and also society.

“The year 2020 marks the 25th anniversary of the passing of Her Royal Highness Princess Srinagarindra, the Princess Mother. The younger generation of Thai people aged under 30 might not be able to remember the Princess Mother or what she did. Some people might have heard her words, or heard about her simple lifestyle. But everything is based on tangible facts that are useful and contemporary. One such quote by the Princess Mother that fits with the current global situation where things have totally changed is, ‘Everyone has to adapt. If you can adapt, then you won’t have a problem. I myself have had to adapt, too.’ This is a principle that can be applied to our present situation.”

Mae Fah Luang Foundation under Royal Patronage was established by Her Royal Highness Princess Srinagarindra, the Princess Mother, who dedicated herself to improving the lives and well-being of the people in rural areas, especially the ethnic minorities in remote areas of the country. Her Royal Highness was aware of their suffering, their lack of opportunities in life, and the illnesses that affected people in remote areas. Every time that she visited the villagers, she would always be accompanied by medical personnel to provide treatment for the sick. She distributed clothing, food and other necessities, as well as toys for children. In the eyes of the hill tribe villagers, the Princess Mother was like an angel who descended from the sky to relieve their suffering. That’s why they gave her the name “Mae Fah Luang”, in a show of great love and respect from the hearts of all the hill tribe people.

The Princess Mother continued working throughout her life to improve the well-being of the impoverished communities and ethnic minorities so they could have a better way of life until she passed away on 18 July 1995 at the age of 95.