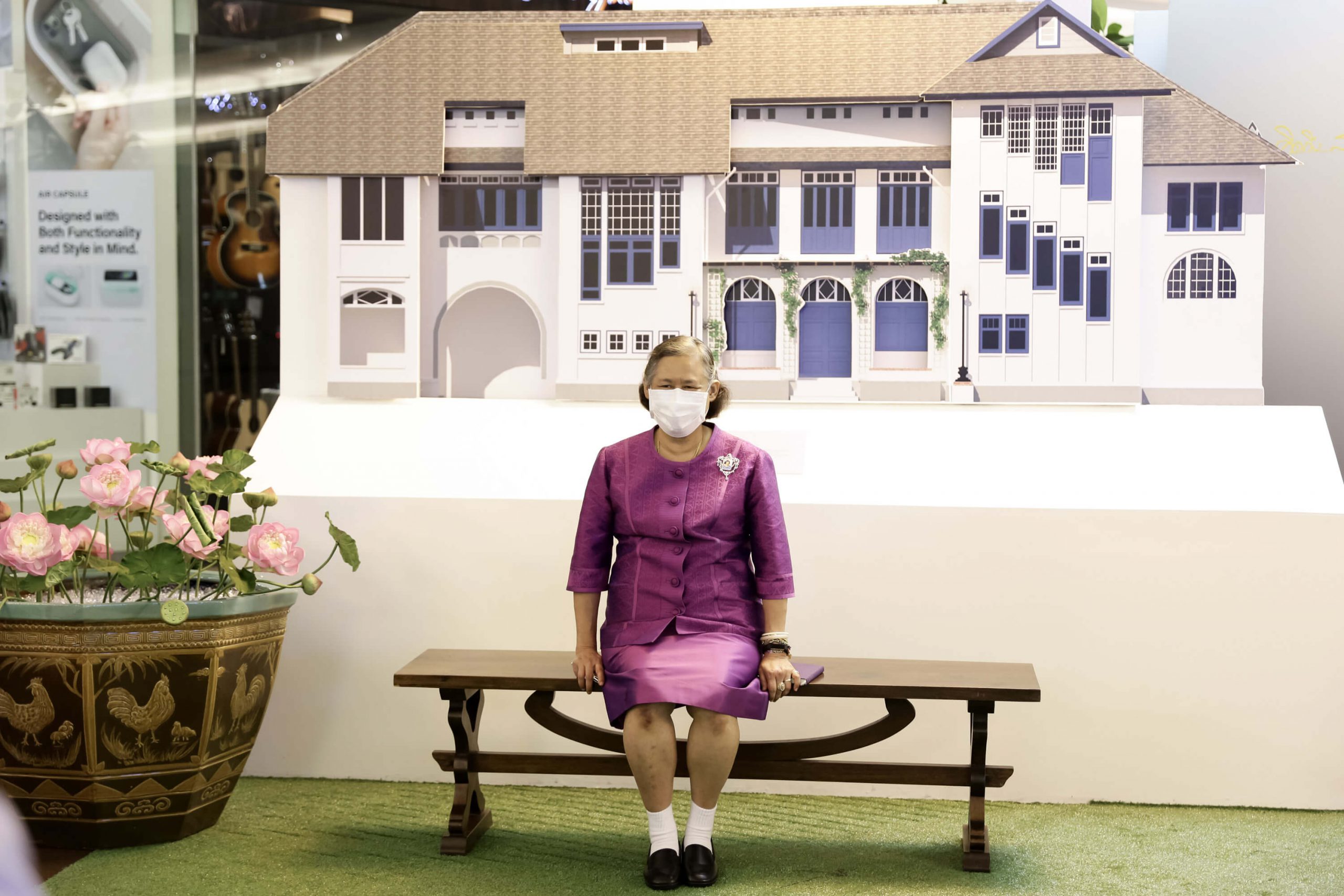 Thanpuying Putrie Viravaidya, Secretary-General of Mae Fah Luang Foundation under Royal Patronage, explained, “The ‘Kid Tueng Somdet Ya’ exhibition was first held in 1996, and has been held annually since then to convey gratitude to the Princess Mother for her contributions towards the well-being of the Thai people. Her Royal Highness was a role model in every lifestyle aspect, carrying out her work throughout her lifetime. This year. the 23rd consecutive year of the exhibition, also marks the 120th anniversary or 10th cycle of her birth, as well as the 25th anniversary of her passing. The exhibition has therefore been designed under the theme ‘In Her Thoughts’ to reflect her life and achievements that were influenced by those close to her, the society around her, as well as thinkers, philosophers and academic texts, all of which helped to formulate her life skills as well as her emotional and social quotients throughout her life. The highlight of the exhibition was the reproduction of her lecture notes personally handwritten in French by the Princess Mother, the first time it has been displayed in public.”

The exhibition was presented in the form of a timeline, starting from her birth up to her death, as well as her visions that have been carried on by various foundations or organizations up to the present.

Part 1: 1900-1917 showed her childhood, education, growth in a small community near Wat Anongkharam, joining the court of Princess Valaya Alongkorn, becoming a nursing student at the Siriraj School of Pediatrics and Nursing, and winning a scholarship to study nursing in the US.

Part 2: 1917-1923 showed her life as a scholarship student overseas that allowed her to experience new things, learn new technology, arts and culture, as well as language skills. The turning point in her life was meeting, and eventually marrying, Prince Mahidol, and starting the Mahidol family.

Part 3: 1924-1932 Not long after the princess settled into family life, tragedy struck with the death of Prince Mahidol. Despite having to bring up her children amidst social and national changes, the Princess Mother managed to raise the young royals in a happy and healthy environment at Srapathum Palace.

Part 4: 1933-1971 was the time the Princess Mother had to care for her children while they were studying overseas. At the same time, she expanded her own education, studying philosophy, Sanskrit and Pali seriously, all of which were presented through the reproduction of her lecture notes and text books.

Part 5: 1972-1995 Apart from the Princess’s royal activities carried out for the people, she spent her leisure time on her favorite hobbies, believing that “Time is Precious”. These hobbies included sculpture, embroidery, pressed flowers and ceramic painting. Her interest in astronomy led her to decorate the ceiling of Doi Tung Royal Villa with a chart of the solar system and the various constellations, all of which have also been replicated for this exhibition. The Princess remained respected and beloved by the Thai people until her final days.

Part 6: 1996-present The Princess’s vision continues to be carried out by various organizations even till today, including Mae Fah Luang Foundation and Doi Tung Development Project. This includes addressing issues of poverty, improving the economic environment and quality of life of the people.

The 23rd “Kid Tueng Somdet Ya” Exhibition under the theme “In Her Thoughts” presented the compassionate activities of the Princess Mother, as well as her life and achievements. The exhibition also offered products from Doi Tung Café and DoiTung Lifestyle, as well as decorative plants. The event was held from 21-25 October 2020 at the Lifestyle Hall, 2nd floor, Siam Paragon Shopping Center. For further information, call: 02-610-8000 or check Facebook: SiamParagon.